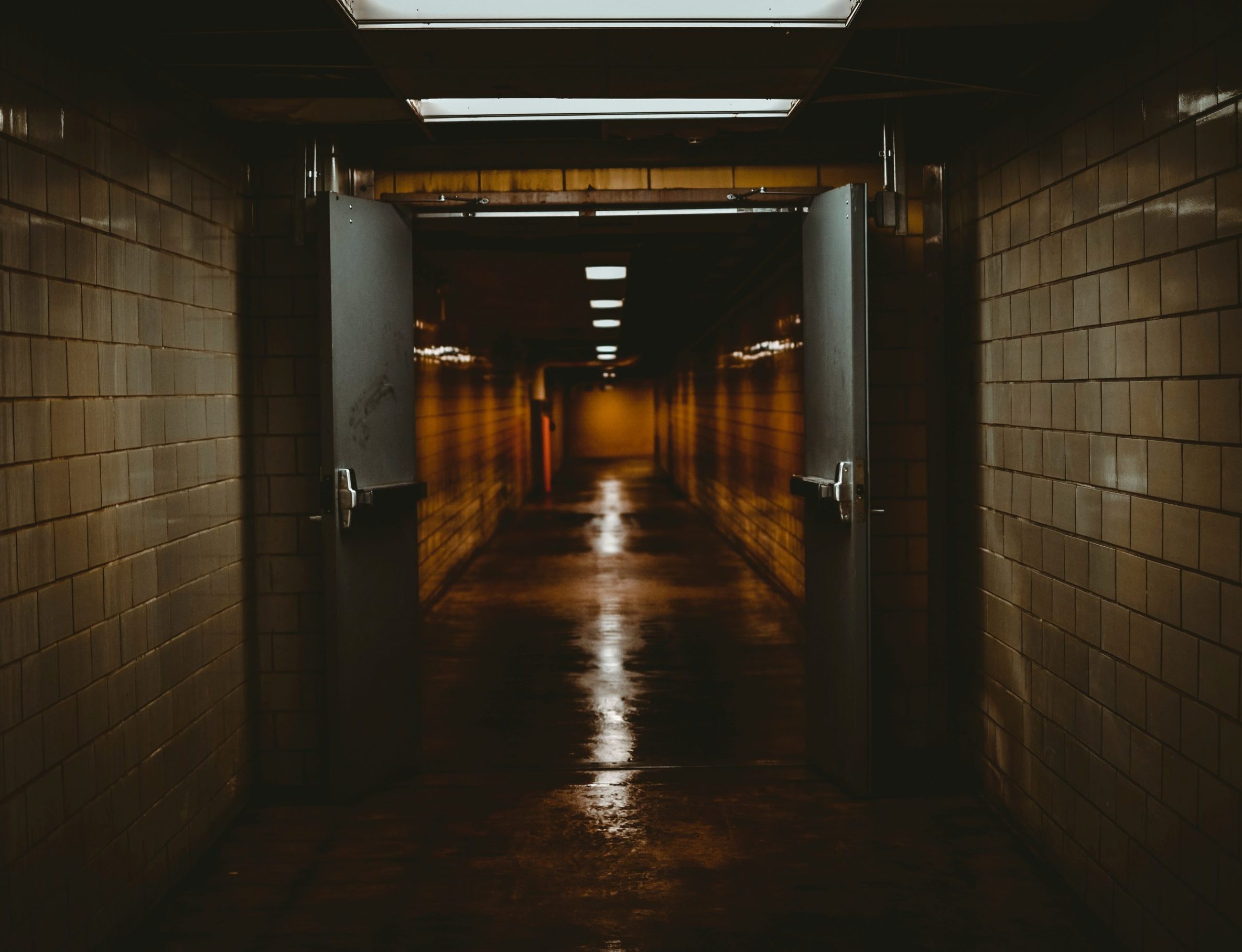 A strip of leather or length of cord fastened to a handle, used for flogging or beating a person or for urging on an animal

Young Kook kneeled before his dad, rubbing his palms together with soaked cheeks and tears falling every time the whip came in contact with his skin.

The old man had no mercy whatsoever. He gripped the whip and lashed it one last time harshly over Jungkook’s back.

The young boy screamed, as the pain spread under his ribs, his toes curling to withstand the pain.

“Men don’t cry Jungkook. Get that in your head. Now stand up,” his father commanded.

The ten-year-old’s skin felt numb with all the harsh beatings.

What happened for minutes felt like hours of torture.

Jungkook tried to grab the nearest chair and put all his weight over it. With the last ounce of strength, he lifted himself.  He stood there in complete silence with his head hung low, wincing in pain.

The old man spoke in a strict tone. “I had decided to make you the next successor of Jeon Corp, but all you do is disappoint me every fucking time. Your mom and I have decided to send you to the hospital until you get control over that anger of yours. You are not coming back until then. Am I clear?”

The kid bit his lip in frustration. He simply couldn’t speak, scared of what the outcome would be. He stood there gritting his teeth, staring at his feet with tears falling over his designer shoes, wiping them instantly for fear of the person before him.

“Guards!” the old man called. Two highly built bodyguards in suits entered the hall, each standing on either side of Jungkook.

The kid’s shoulders resigned as he was squished between the two huge men.

“Escort Jungkook to hospital and make sure to keep an eye on him.”

With that, the old man turned around to hang the whip on a very extravagant hanger over the finely crafted wall with beautiful carvings and imprints. The man smirked as he traced his fingers over the beauty in front of him.

Jungkook was being dragged by the guards, but he could care less. His eyes were still fixed on the man in front of him who admired his work more than his own son, whom he saw nothing more than a big disappointment.

That was all it took for the young boy to fill his heart with wrath for this man. His only aim now was to claim that beauty on the wall, to conquer the power and wealth his dad admired, to be more than just a disgrace to his dad.

The condition may last months or years, with triggers that can bring back memories of the trauma accompanied by intense emotional and physical reactions

“Doctor Han! What do you think is the problem?” the attending nurse asked.

“His CT scans are clear, but his tests are positive, too,” Doctor Han said, fixing his spectacles and scanning the reports once again.

The nurse furrowed her eyebrows. “Then, is the kid pretending to be deaf?”

“I never said that.”

“Then?” the nurse asked, curiosity killing her.

“But, you just said his reports are clear.” The nurse noticed the change in the doctor’s expression.

“I know, I said that. I am trying to validate a reason for his hearing loss, but nothing seems to be fitting. I think his hearing loss is more psychological than physical.” Doctor Han rubbed his eyes before speaking again. “When you encounter something too extreme, your body tries to pull out techniques to trick your pain in an unusual way. And that’s exactly what the kid is going through right now.”

“So, what’s the solution, doctor?”

“For now, let’s put him in the psychiatric ward and watch closely, and then—” His words were cut short when a resident ran into his cabin, panting.

“Chief, we have an emergency!” the resident said in fear.

“What is it?” The chief got up from his chair.

“Chief, the boy is out of control!”

The senior resident, along with Doctor Han, rushed out of the cabin and towards the room where the boy was held. All of them watched through a glass window.

Brought to the hospital by cops 3 hours ago.

Suffering from hearing loss after the incident.

One of the residents read the patient’s details as per the routine.

Doctor Han placed his hand on the glass with a face of defeat, unable to think of a solution for the kid in the room.

The kid was shivering and screaming at the top of his lungs, unable to correlate the location he was in, slapping his ears multiple times and pulling them repeatedly to hear something.

But the kid couldn’t hear anything.

Doctor Han rushed into the room, guiding the nurses to hold the boy who was going crazy. He immediately searched for the vein in Tae’s elbow, and when he found it, he injected the midazolam.

Young Tae took a few sharp breaths, and soon, his breathing was stable, under control. His eyes fluttered a bit before he drifted to sleep in the arms of the chief.

Doctor Han carefully lifted the tiny boy in his arms and headed towards the psychiatric ward.

Refuse to take notice of or acknowledge; disregard intentionally

Jungkook shouted as he kicked his legs in the air, still being tightly held by the two bodyguards who were taking the boy to the assigned room.

They could care less about the boy and kept marching towards the room. After reaching it, one of them slid the door open, while the other slowly released the kid into the room and immediately shut the door behind them.

They stood outside the room all cold and stiff, making sure the door was tightly closed.

Jungkook prevented himself from falling forward by placing his hands on the chair in front of him. He instantly turned around and started knocking on the door repeatedly until his knuckles turned white with the force of his clenched fists. Kicking the door until his toes started to feel numb, he kept protesting.

“Let me go you assholes!” he screamed with all his might. But, there was no response.

Jungkook’s had anger issues that got worse in a situation like this. The connection between his mind and body would get cut. He didn’t think twice before breaking stuff that was before him.

And that was exactly what he did.

He roamed the entire room, pushing all the supplies on the cabinets to the floor. Turning everything upside down, from small medicine bottles in the drawers to huge machines that recorded a person’s heartbeat, he destroyed everything that came in his way.

It was surprising how his small figure managed to push down a huge cabinet with the IV lines and bottles that simply spilt over the white tiles.

Even after he created so much commotion, nobody responded.

His nose was flaring, his eyebrows furrowing, and a pout was on his lips. He marched towards the bed covered with blinds and shoved the curtains with one hand only to see a small, petite kid sleeping peacefully on it, all curled up into a ball.

Why didn’t the kid get up from all the sounds and mess he created?

It angered him even more, his chest still heaving up and down from all the running. But, the bed was too high. Jungkook instantly went to pull the chair towards the bed and climbed on it.

Once he was on the chair, he jumped forwards, kicking the chair behind and smoothly landing on the bed.

He crawled on his hands towards the boy and stopped when he was just inches away from the black-haired kid, who slept like a stone, not realising there was someone beside him.

One, because the boy was straight up ignoring the one and only Jungkook, and

Two, because the boy was too cute.

Kook instantly shrugged his thoughts away and poked one of the boy’s cheeks, to which the latter simply scrunched his nose and snuggled his head deeper into the pillow.

“Yah! Get up,” Jungkook yelled, keeping his hands on his hips and his chin high as if he was a boss.

But, to Jungkook’s dismay, the boy didn’t respond again.

Jungkook angrily pouted and started to throw his hands on the boy, repeatedly hitting him.

The black-haired kid’s eyes instantly shot open, and Jungkook flinched and scooted back as if he saw a dead person come back to life.

A mental health disorder characterised by feelings of worry, anxiety or fear that are strong enough to interfere with one’s daily activities

Taehyung squinted his eyes at the sharp light that came from the bulb over his head. He looked around and immediately realised that he was in a different room.

His eyes finally fell on the small figure that sat in front of him with crossed arms and a flaring nose as he stared at him. There was a small frown on the boy’s forehead.

Jungkook smirked at the trembling boy. This is exactly what he wished to see, so he slowly crawled towards the kid to scare him properly, to show him who he was.

“This bed is mine now. So, get down!” Jungkook commanded.

But, Tae just stayed there, not moving an inch, his eyes closed.

Jungkook couldn’t take it anymore. His anxiety was kicking in again.

The picture of his father standing in front of him with a whip in his hands was sending cold shivers to his heart.

The look in his eyes changed. His expression faltered as if he was possessed. Kook grabbed both of Tae’s arms and pulled violently, making Tae quiver and tremble under his grip.

“Get off this bed. This is MINE!” Jungkook screamed at the top of his lungs, but poor Tae couldn’t comprehend a single word.

Tae just couldn’t understand why Jungkook was behaving like this. He simply stayed there crying and trying to push the boy away with his feeble hands.

Jungkook felt like his head was going to explode. No matter how much he screamed, how much he struggled, the voices echoed in his head.

You are nothing, but a disappointment.

You can never take my position.

You aren’t worthy of my title, Jungkook!

Jungkook’s anxiety shot down his spine. He couldn’t process his surroundings anymore. He pushed Tae with full force. Tae tried to clutch onto the sheets but failed miserably and fell straight on the cold tiled floor.

Jungkook finally laid his eyes on the kid who was on the floor, not moving or shaking. It sent a wave of fear through him. His breathing fastened with chest heaving up and down. Tears rolled down his cheeks, and he screamed until his vocal cords hurt.

Amy is a second-year med student. She writes soft stories to inspire and motivate people. Books are simply a means to express her emotions to the public. This is an excerpt taken from “Tattoos & Pillows” by Amy with permission. Read the full story here.