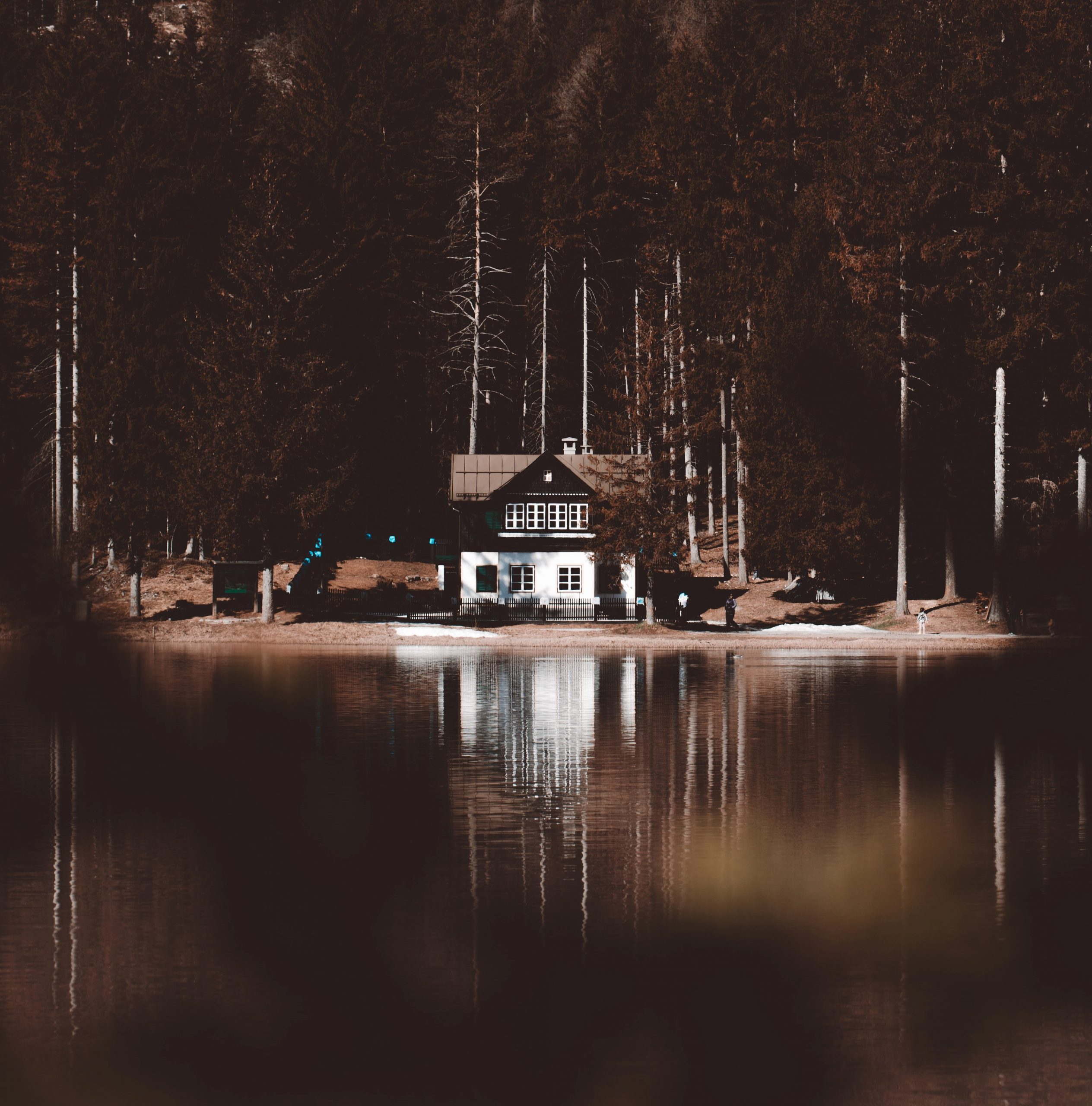 Under the shadow of the moon, only the street lamps illuminated my figure in the moving taxi. I watched as the urban area became a suburbia; a complex array of homes and apartments scrunched together.

The sun had set a while ago over the sky of January; the nights had been invading the days. My eyes were alert as I knew what I was doing was wrong. I was invading someone’s personal life.

I remember attending therapy with Jimin once, waiting for him to exit the room. It was as if he was put in some sort of trance, in a state of complete desolation. He chanted words, an address. . .

I watched as we made a turn on Moonstone Lane, the numbers descending from forty-five. The houses weren’t an eyesore. I was surprised this was the neighborhood of Jimin’s childhood.

But why am I doing this? Right. I need answers.

When the taxi stopped, I didn’t know what to make out of the house. I exited the vehicle and stood on the asphalt, alone in the cold of winter. These houses looked occupied despite their maturity. I just couldn’t wrap my head around how this perfect house in front of me contained abuse.

I took a deep breath as I could imagine his mom grabbing the young boy by the wrist, dragging him helplessly to the bedroom. There would’ve been a point he reached where he’d have to accept that his life was going to be like this. He’d have to undergo a complete submission to his mom.

The burns on his wrists where his mom would tie him to the bedpost were visible when I met him. I could vividly see the way she toyed him, raping her own child to satisfy her desires. Those desires eventually would lead to her becoming pregnant, causing her to abort the poor creation and attempt to murder Jimin.

She drugged him, his nearly lifeless figure dragging across the alcohol-plagued floors. He was in the hands of God. Nobody could save him. An ensign hidden from the world, one that I stumbled upon in that internet café nine years ago.

His mom would’ve turned the faucet on cold, letting Jimin feel what her heart was made of. It wasn’t even right to assume she had blood. Her acts were too horrendous to call her human. The way she haphazardly lifted her son, a precious human soul, and carelessly threw him in the waters of cold reality began to wear me down.

Why am I feeling this way? Jimin is after to kill me!

Her hands would’ve been pushing the boy to the bottom, her happiness exploding as he neared death. In that ice-cold bathtub, in a house that was built for a family, there was a boy. A boy too blinded by a hope that his mother would change, so he never left.

This boy still took care of his mother despite the cuts she had torn on his skin. He still went out to purchase the groceries, even getting medicine if his mother had fallen ill. He recognized that the monster he lived with was a human and helped her regardless.

She took advantage of her own son thinking that his pain was beautiful. She thought his body, his starved and frail body, was eye-candy. She put her son through hell for her twisted happiness, was rewarded with another child that, if survived, would’ve never been able to function properly.

And Jimin, the child of the sun, nearly lost his life in shallow waters. Shallow waters in a contained area that could’ve been controlled by his mother. And in a way. . . it was.

But like always, the boy somehow survived. He defied death, rising out of the water as he went into it. His body was covered in goosebumps, shivering like an earthquake. Although surviving such a brutal punishment, he was dragged by his hair only to be locked up.

He was locked away for a week with no other company but himself. His self-destroying thoughts plagued his mind as he stared at a wall that should’ve had a window, in a room with nothing but the light under the door to enlighten it.

No bed, no couch, nothing comfortable or warm. Just his body and the cold tile that welcomed him. Like the light, only a sliver of hope must’ve remained in him. His desperation must’ve been so high that he needed to hold onto it for survival. Just as the bar of light that wasn’t enough to fill a room, not even a foot of the tile past it.

The agonizing pain of starving, crawling for something, anything to keep his corpse-like figure alive consumed him. There wasn’t a point in screaming or wasting energy on something unprofitable. He had reached a state of total exhaustion.

If it weren’t for his hope and patience, he would’ve passed. He would’ve let his mom kill him, or he would’ve done the deed himself. Like the moon I held onto, his hope came from the light under the doorway.

Silent and quiet his torture would be, himself as his own hero and enemy. It would all end with something possibly worse than starvation, his mother pulling him off the ground only to beat, torture, and possibly attempt to kill the boy. Not even being of legal age, he’d be treated like an animal in a farmhouse. To his mother, he was nothing, valueless.

Every night he’d go through the abuse. He could’ve got her arrested, but he never had the heart. It wasn’t until this moment I understood why he could never build up the courage. It all made sense why I had to censor some words around him because. . . he actually loved her.

She was his mother. He didn’t know any better. He was never taught mothers are the ones to care for and provide. After all, he was closed off from the world. He was brainwashed into thinking his mother was the definition of love. He had fallen for a trap, not knowing any better.

“We didn’t know any better.”

His last words before his death in my imagination rung in my head. He loved his mother and saw her in a way the world couldn’t. He saw her as a human. He saw her as someone misunderstood, he thought he could possibly fix this. Maybe, he even made it his goal to make her proud, something that would ultimately fail in the end.

Because that’s when fate decided for us to meet. That’s when he realized there was a world that would actually care and love him. And I failed at that. I failed at being his only family while he succeeded at being mine. Something that was supposed to be a fair trade happened to be something that I completely failed at.

He wants to kill me so I can be free. He knows what’s best for me. I need to be imprisoned for what I’ve done. This is the payback I deserve.

I need to die. For him and Donghyun. For the rest of the world. Because I know without a doubt that he’d never betray me. It’s only been me who’s betrayed him. I need to pay the price.

As I continued to look at Jimin’s childhood home, I couldn’t get my mind off the horrible things that had happened. The things that should’ve never occurred.

His past, my past, why are we so similar?

I, too, was held against my will and cast into a body of water. I was supposed to die. But we both survived. Our wings were opened, and we were set free.

We were both held in the dark with nothing but a small light keeping us company. However, he found hope in it, and I did not. Two people broken by the hands of another. One glued together, the other still shattered.

The frosty air ate away at my fingers and nose as I contemplated Jimin’s dark-ridden past. I was in awe of how someone so hurt and broken was able to change into someone perfect. He was an angel who set out to take me down, I being a demon.

Those four cuts on his wrist remained an unsolved mystery until tonight. Now, I realized you couldn’t cover up your past. It’ll forever haunt you as long as you may live. The only way to get over it is by accepting the pain and brutality life gave.

But even by accepting, it doesn’t make you prone to regression. Everyone relapses now and then, possibly that’s what happened to Jimin.

But why would he tear such beautiful skin? Me. I’m the reason why he cut himself. I’m his tear.

As I stood in silence under the comfort of the dark sky, I stared at his home, analyzing every feature.

30 Moonstone Lane. Named after a stone that holds such mystery and power. A stone that bears all truth inside, not just what’s visible. The number thirty, a symbol of optimism and creativity, something he had, that I once did.

My happiness was trapped somewhere with no intention of getting out. I don’t have the key, but who does?

As I thought, I heard a voice, a whisper. I turned around startled, expecting to see someone. But like always, I was met by the empty void of nothingness. Taking in the house one more time before I turned around, I decided it was time to make a major change in my life.

I was going to visit the psychiatrist.

*Lyrics from Linkin Park’s “Leave Out All the Rest”

Allison, most commonly known by her Wattpad username “8GothicRose8,” has been writing stories since she was twelve. Born and raised in the USA, Allison pursues writing as a way to combat the monotony of her small city. She loves to write thrillers, creating twisted scenes and characters for the reader to enjoy. This is an excerpt taken from “Moonstone” by Allison with permission. Read the full story here.