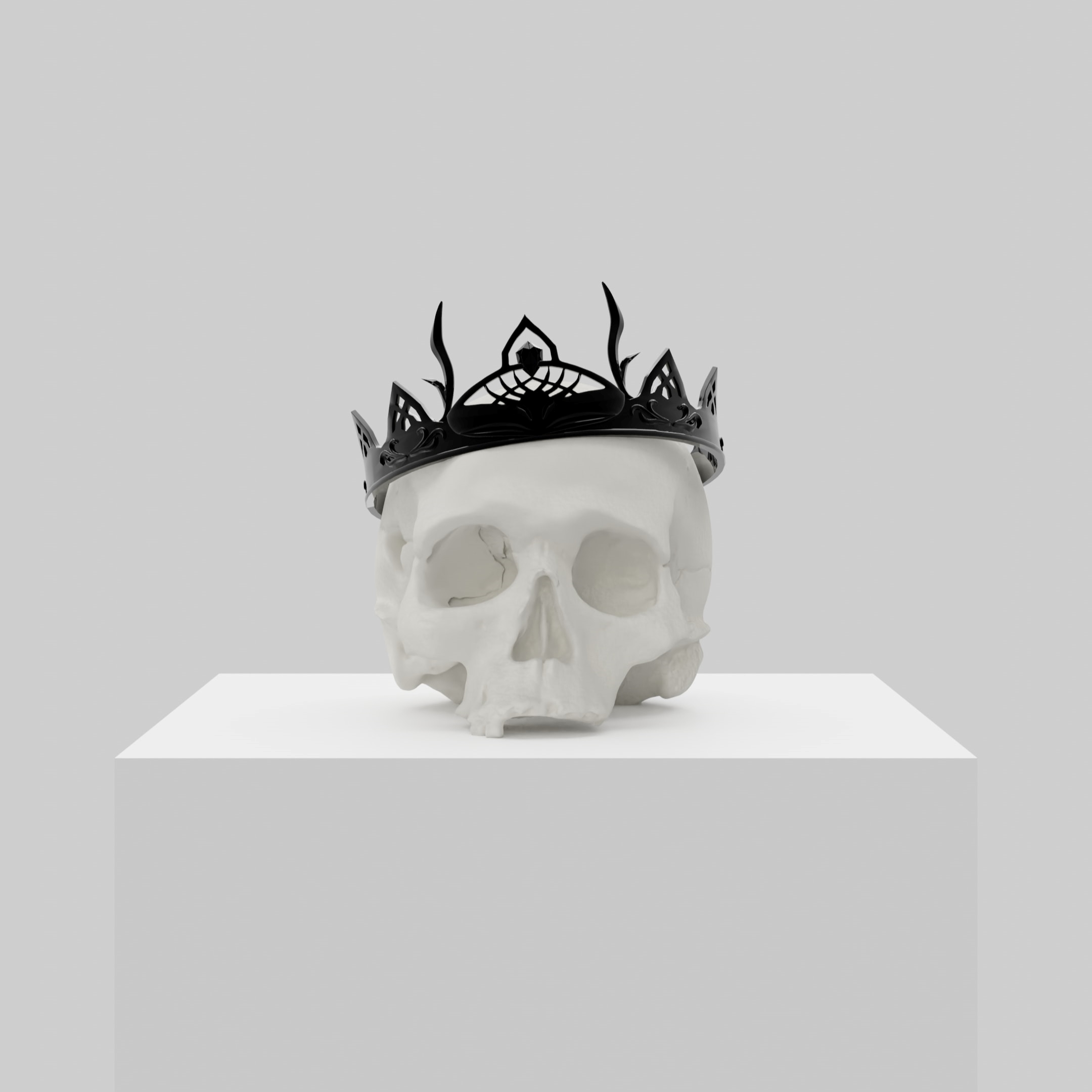 “We found another one.” This single statement could refer to anything from another insignificant mosquito buzzing about the room to another fragment of the broken necklace lying on the floor or even another traitor associated with the Royal Betrayal.

Unfortunately for me, the look on his face suggested that it was along the lines of the last possibility. Letting out a breathy sigh, I prepared myself to leave the sumptuous breakfast laid out in front of me, courtesy of the Royal Chef. Before I could ask him more about what, or rather, whom he was talking about, Jimin beat me to it.

When my gaze locked with his, I noticed him take a quick deep breath before speaking, a small yet noticeable action if you had been taught to carefully observe and peruse people’s body language. Dominie ensured that my observation and comprehending abilities were always in tip-top condition when it came to people.

If I was truly going to be crowned Queen, I needed to be capable of having an honest understanding of the intentions and motives of those around me. With power and fame came a great number of people who would stop at nothing to bring you down, and their body language could always give them away. If I were to master this art, no one could ever come at me without my knowing, and my mentor, Dominie, was ruthless when it came to ensuring that I was more than capable of exploiting their body language to help me discern them for who they truly were.

“Not ‘what,’ Sir, but whom. Another miscreant with an insubordinately high sense of amour propre. The egotistic brat refuses to leave and demands an audience with His Majesty. I’m afraid he’s quite adamant and is building up quite the ruckus. He even threatened to approach the media if he is denied the audience he seeks,” my chief escort elaborated.

“Father will take care of the press. He practically owns all of the Communication Networks. One puny little boy isn’t going to change the authority he holds over them,” I retorted quickly in hopes of not having to deal with another angry, discontented rebel.

“He threatened to distribute pamphlets about how the Royal Palace dealt with those who chose to voice their grievances. It’ll sow the seeds of discontent in the people’s minds and stir a revolution. Besides, this would be an outright denial of a citizen’s right to free speech and set a very bad precedent for the competency and transparency of the working of the Monarchy. The rebels are already behind most of the common people’s dissatisfaction with the Royalty, and if he’s not addressed, it’ll only add fuel to the fire while also. . .”

While Seokjin continued his elaborate thesis on the potential dangers this single unarmed little boy could pose to our authority, I contemplated my alternatives to dealing with an angry rebel before breakfast, although it didn’t seem like I could get out of it. By the time I finally lost all hope and was prepared to tell Jin to get the guards ready, the Chief Escort caught my attention with some especially horrifying news.

“Oh, and your father already knows about this. He himself told me to send you in his place. I believe his exact words were—It’s about time my daughter proves her worth as the future Queen instead of simply lazing about the Royal Household.”

“So, Father thinks I’m incapable of running the kingdom. Huh, not quite unlike him. Guess I just have to prove his assumptions false.” I snickered to myself. “Seokjin, get the guards ready. I’ll meet that boy in Court as soon as I’m done with breakfast. Oh, and have Abigail sent over at once, please.”

As I grabbed the syrup, I felt Jimin’s eyes on me—curious, questioning and perturbed. His foot was agitatedly tapping the floor, his fingers drumming on the table.

“You know, it’s not your fault. You’re doing all you can, but he’ll probably never accept you for who you are. Who you want to be. All he ever cares about is the throne, and of course, in his accurately perceptive opinion—women aren’t fit to lead the State.”

I wanted to smile at the sarcasm in his words but could only nod silently, trying to thwart all the painful memories—and the tears—from rushing up to the surface. He just grabbed my hand and held it in his, interweaving our fingers and gently squeezing mine as he reminded me of just how much more I was worth, trying to comfort me in the best way possible.

Well, not the bestest best considering what he’s capable of, but eh, pretty close.

As Yoongi brought the second serving of pancakes, I eagerly set my sights on the gorgeously golden little beauties as I relished the divine aroma arousing my senses. Yoongi served the best pancakes, and I meant it —The Best in all of Illéa and even the world. Scratch that. He served the most delicious food in creation.

“Serving your Queen-to-be another round of your heavenly pancakes so that she’ll fulfill your desires?” Jimin ragged Yoongi with a suggestive smirk on his face.

“What desires?” I asked inquisitively, my curiosity aroused.

The normally emotionless Yoongi shifted uncomfortably before placing the platter of pancakes in front of me. “Eat up, little muffin. If what I heard is right, you’ll need all your strength today.”

Looking back at it now, I suppose I could have inquired how he heard the news so quickly if he had been busy cooking all morning or the sudden change in topic, but I only pointed out that I wasn’t ‘little’ anymore.

As if on cue, Abigail arrived right when breakfast ended. With a quick peck on Jimin’s cheek, I headed back to my quarters with my Head Maid to get dressed. I was greeted by my chambermaids at the entrance to my quarters—Jena, Hana, Dami and Lia. After a short yet relaxing soak in the lavender bubble bath, I stepped into the dress they had picked out for me.

The sleeveless, purple dress featured an off-shoulder neckline, the sash wrapping itself around the top of my arms with a slightly plunging yet elegant neckline. I paired the dress with a matching set of silver and amethyst earrings and necklace along with similarly deep rich purple heels.

As I gazed back at my reflection in the full-length mirror, I had to admit, I looked ethereal. The dress perfectly fit over my curves, and the rich purple exuded pure royal charm, capable of bending any obstinate pertinacious man to my will. The accessories only amplified my appeal, and I was fully prepared to meet the irksome rascal who was responsible for ruining my relatively peaceful morning.

After descending the winding staircase, I was greeted by a handsomely dressed Jimin, clad in his third favourite all-black suit with a contrasting brilliant white tie. His blonde hair had been smoothly combed back with some hairspray, and a shining diamond ring adorned his little finger—my gift to him for his eleventh birthday.

His eyes widened slightly when they caught sight of me, a light blush of pink embellishing his cheeks, his eyes sparkling and mouth gaping.

“Are you gonna stare all day long now?”

Suddenly realising that he had been unintentionally goggling me, the embarrassed man abruptly cleared his throat and gently placed a kiss on my right hand.

“Only because your beauty is bewitching, mi amor. I apologize, though. I was planning to only escort you to the Court, but now it seems that my presence is required, lest I end up with a harassment case on my hands.”

I only looped my hand in his outstretched arm, smiling internally at his flattering nicknames reserved solely for me. We walked in silence, and he simply squeezed my hand when we neared the entrance. That little gesture itself conveyed more than words could. At that moment, I felt ready to take on the world.

Which was pretty good considering what I had to face when the doors opened to reveal the Court Room.

Ash is the sexy author you never knew you needed. All you need to know about her is that she’s a fun-loving, chaotic crackhead who’s too HIGH for her own good. Welcome to the world of a crazy Jungkook fanatic who perseveres to one day write the best book you’ll ever read. Welcome!!! And don’t be surprised if you can’t leave. This is an excerpt taken from “Love Is Selfish” by Ash with permission. Read the full story here.