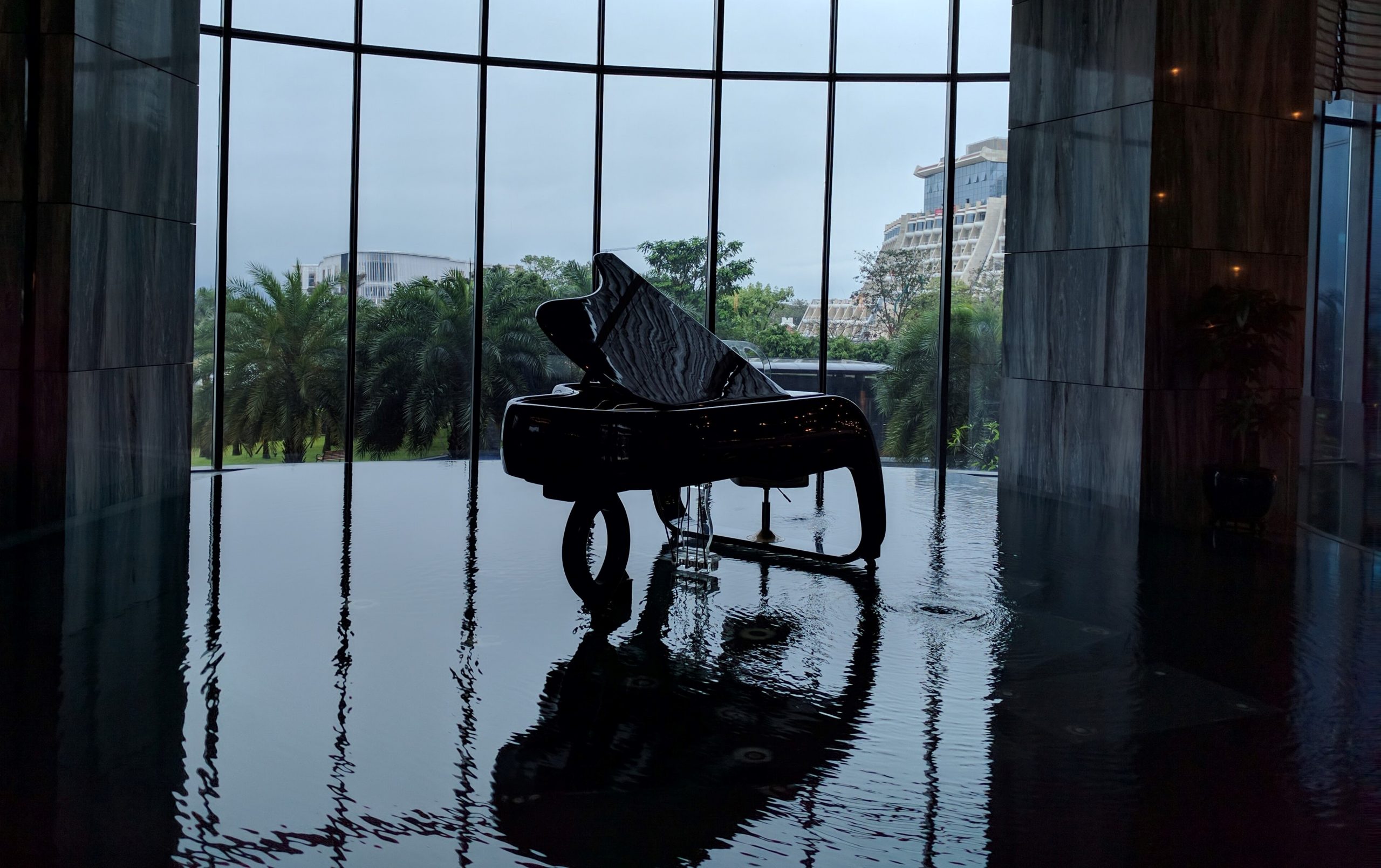 “Lovers don’t finally meet somewhere. They’re in each other all along.”*

Busan was pretty in the spring and so was the concert Min Yoongi was supposed to play at.

I sat down on the leather couch in the hotel room as Yoongi got ready behind the doors of the bathroom. The mirrors and aesthetic lighting created a pleasing scene.

Busan was my escape plan, an escape from madness and me chasing you and you chasing me and Professor Kim constantly asking if we have penned our articles yet.

Yoongi stepped out of the dressing room in a black suit. He stood in front of the mirror, evening out the lapels of his black dress shirt underneath.

“You are wearing your earrings today,” I pointed out. He smiled as his eyes met mine through the mirror.

“Yeah,” he said touching the back of his ears. “I felt like it was a long time since I wore them, and since I got my make-up done after a long time, I decided to go for them today.”

“It is a good decision you made. You look sexy with them,” I commented. We giggled together like teenagers stuck in the body of two adults. “Will you play the Moonlight Sonata?” I asked since he had been practising that for a long time.

“No,” he said as he sprayed perfume on the lapels of his shirt.

I furrowed my eyebrows. “Why?”

“The Moonlight Sonata has a serenity that disturbs me.”

“What will you play then?”

“You will see,” he replied in a mysterious tone before adding, “Have you brought your clothes, or are you going to attend the show in a pair of jeans?”

I hit his arm before saying, “I do have my clothes. I will change right now. Wait outside.”

I snatched the zipped-up bag containing my clothes and stepped inside the bathroom. Squeezing a little paste on my toothbrush, I brushed my teeth.

I sat in front of the mirror observing my reflection. Yoongi was waiting by the window of the hotel room, speaking into the receiver of the phone in hushed voices. Hair combed to the right and parted from the side, in a black dress that reached my knees with a silver chain circling my neck, paired with a pair of silver earrings dangling from my ears and cherry red lipstick, I knew I looked beautiful.

It was sad that there was no one to appreciate this beauty.

I got the front row seat. It was one of the perks of being acquainted with the pianist.

Yoongi played a piece I did not think he would play. He started with Bach’s preludes and Italian Concertos and moved to Beethoven and Chopin before the Intermission. Then, he played Debussy and ended with Rondo Alla Turca (Turkish March).

That boy never failed to surprise me.

They say once you see your fated one, you end up seeing them over and over again because destiny is a powerful thing that needs to be feared. And destiny makes slaves of us all just like love does, so we end up getting stuck in a maze—a maze without an exit.

That is probably why I ended up seeing you everywhere I went since the night in the bar. Since you had noticed me once.

It all started when Mr. Cho, the Chief Executive Officer (CEO) of Rico Corporation, invited Min Yoongi to the afterparty. Mr. Cho was the organiser of the event, and since Yoongi could not refuse, he dragged me along with him.

“What will I do over there?” I hissed at him.

He still dragged me to the party, though.

“I am going to get a drink,” I told Yoongi as he stuffed his face with spicy chicken, making him look like a chipmunk.

Free food. I sighed. People would do anything for free food.

The table of drinks mainly consisted of white wine with only a single glass of red wine left. I reached for the glass as someone else reached for it, too. Our hands brushed. I looked up only to be met by your eyes. I sharply inhaled.

“Arabella,” you acknowledged with a slight nod. A woman clung to your right hand. She was alluringly charming in gold earrings and a red dress.

I stared at you. No no no, my insides screamed. Busan was my escape plan. I was supposed to clear my mind and think. Why am I seeing you here, too?

You took the glass of red wine and gave it to the woman. She gratefully took the drink, pecking you on the cheek.

I balled my fists. You took a glass of white wine as your eyes met mine. You were purposely doing this, weren’t you?

“Can you please pour me another glass of red wine?” I asked the staff member attending the table.

“I am the date of today’s main artist,” I quickly added.

He scrambled to pour me a glass.

Min Yoongi sat behind the piano the second time that night as he played with a violinist and was accompanied by a woman singing to their tune. She had a melodious voice.

People were quick in finding partners and accompanying them in a dance, while I stood awkwardly in a corner toying with my drink.

It was not the fact that I could not dance. It was just that I did not want to dance.

I identified the music as a recent Taylor Swift hit. The Lakes. The lyrics hit differently now I was hearing it as my eyes invariably spotted you in the crowd, dancing with another woman, making my heart ache.

I don’t belong, and my beloved, neither do you

Those Windermere peaks look like a perfect place to cry

I’m setting off, but not without my muse

No, not without you

You danced with her. Your hands never once fell to your sides, and your feet did not get tired. As the song drew to an end, she kissed you in front of so many eyes. You broke out of the kiss and pulled her out of the hall with you. Once again, I went back to the position I originally had in your life.

I stepped outside to the garden, discarding my glass of wine. I decided to wait for Yoongi in his car, and he gave me the spare key.

I would not have stopped on my way had it not been for you sitting on a bench under the stars isolated from the rest of the party. A scar ran down your left cheek.

I gasped as I sat down beside you, making a bold move of touching the fresh wound. It looked like someone had dragged their immaculate nails on your cheek. You flinched but you did not say anything.

“How did this happen?” I softly asked.

“She paid me for escorting her, not for kissing me,” you said.

The cracks in my heart ached again as the breeze of your words passed through them, rattling them. Intimacy had monetary value for you. But it did not matter because that was the closest you would get to intimacy.

“No, thank you,” you declined politely.

I leaned back on the bench deciding to wait there instead of by the car. I could feel the charged electrons in the air. You were sitting so close to me. I thought it was an illusion when you raised your hand and brushed the hair off my cheek. The gesture took me back to the night we spent together. I turned to look at you as you stared at me, an unreadable expression in your eyes.

“You are too generous to trifle with me. If your feelings are still what they were last April, tell me so at once. My affections and wishes are unchanged; but one word from you will silence me on this subject forever,” you said in a single breath.

It was one of Mr. Darcy’s lines in Pride in Prejudice. I had read the book too many times to forget. And then you leant in to kiss me.

I did not resist.

I let you kiss me.

I kissed you back.

Even when I closed my eyes, leaning on you, I could see a few stars shining in the bleakness. They were tiny stardust of hope. Hope that you could be mine.

As we broke out of the kiss you whispered in a low voice, your breath fanning my lower lip. “The night that we slept together, I lied.”

An activist of too many social issues (which sometimes gets difficult to count), Sam likes to write quick-to-read romance novellas. She mostly writes about Social issues. This is an excerpt taken from “Lilac” by Sam with permission. Read the full story here.