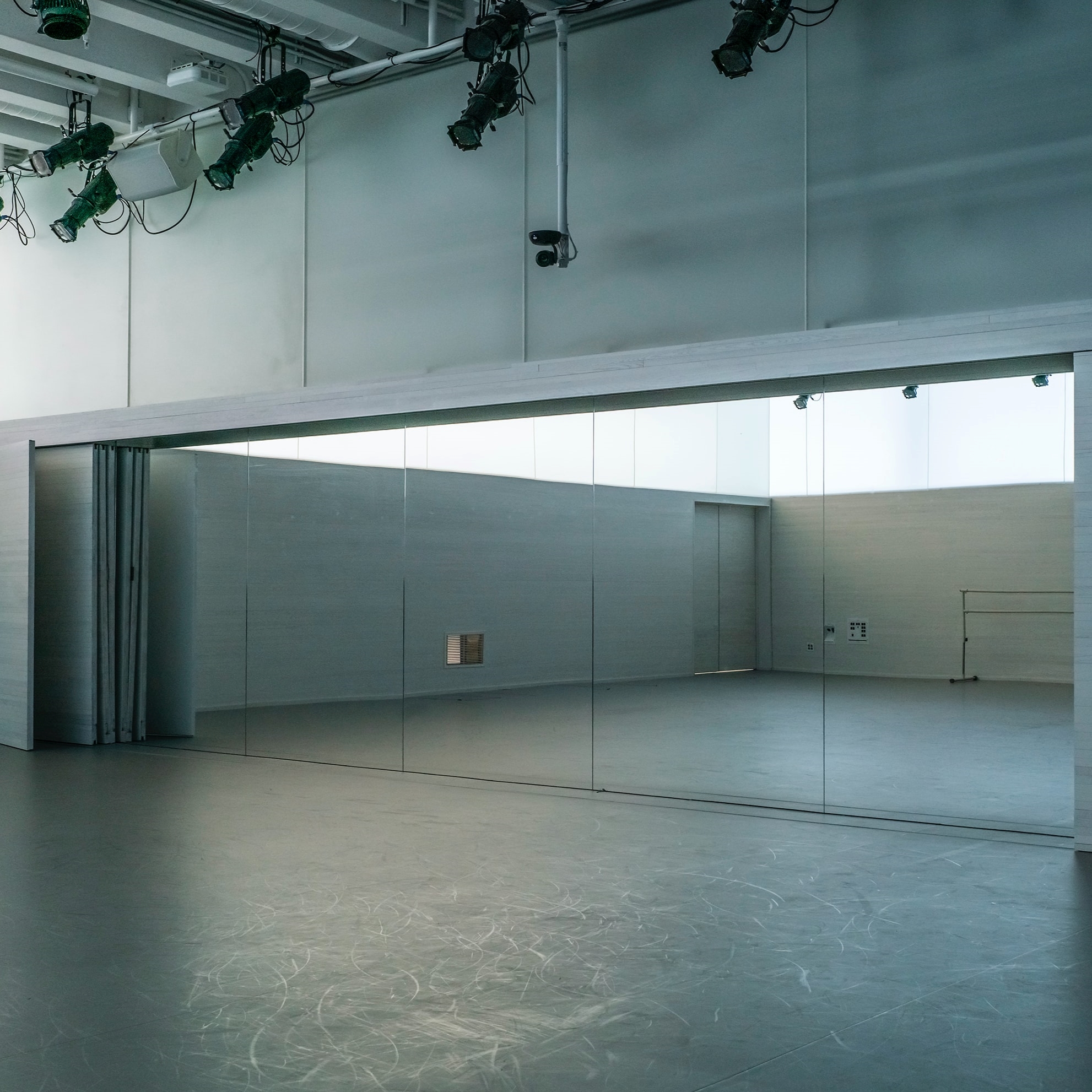 “What are you doing here? Is there anyone else here?” Sunhee asked rapidly. “Please tell me you have your phone or got a friend or someone with you before you come here.”

“Well, to answer your question. . .” Hoseok paused, considering his answer and Sunhee’s agitation, “I spilt water at the studio and was looking for a mop, which brought me here. I’m sorry to say my phone is in the studio. I was alone, and there was no one else on this floor except us.”

“Did you happen to hear any banging sounds when you were in the studio?” Sunhee asked, figuring out how far a person could hear if they knocked on the door again. It was quite thick and sturdy, much to her dismay.

“I’ve been in the studio for a while, and I didn’t hear anything.”

Sunhee sighed. The studio was sound-proofed, so no one would hear the noise from the storage unless they were in the corridor. Other than practice or meetings, no one went to that floor. That made it a perfect hiding spot, but due to this incident, she had to find somewhere to hide next time. She needed to clear her head so that they could escape the room. She was glad she was not claustrophobic, or the small enclosure would make her go crazy.

“Can we move the rack?” Hoseok asked as he looked up at the air vent.

Sunhee silently cheered since Hoseok had the same thought as hers. They could get out if that worked. “I was in the middle of clearing the rack to climb up the vent.”

Sunhee resumed moving the items. When Hoseok helped, they finished in just minutes.

“Damn effing damnation,” Sunhee and Hoseok cursed when they realized a part of the rack was bolted to the wall.

“There must be another way to get up,” Sunhee said. “I’m so so so dead if I miss practice after this.” She looked at her watch. “Scratch that. I am already late for practice. I’m so doomed.”

“You can climb up on my shoulder and try to get to the vent,” Hoseok suggested. They were both quite tall, and the ceiling looked reachable. If Sunhee could move the vent cover, there was a possibility his idea would work. They could tie the cloth in the room together for him to climb up when Sunhee got into the vent. Or better yet, he only needed Sunhee to get out and open the door from outside.

“We could try,” Sunhee said before apologetically adding, “but I’m heavy.”

Hoseok smiled. “You’re not as heavy as the guys I had to hoist up. I can’t let you carry me. I’m way heavier than you are.”

“How chivalrous of you. Good thing you didn’t ask what my weight was, or I might have had to deck you.”

Hoseok crouched to accommodate Sunhee as she climbed on his shoulder. “Here goes,” he said before standing, Sunhee balancing on him. She straightened her arm towards the vent cover and cursed again.

“I can’t reach it. The vent is screwed shut. We are so freaking screwed,” Sunhee lamented as she tried moving her arms and stretching her body to reach the top. Her movement made Hoseok lose his balance.

“Watch out!” he exclaimed before they fell on the floor with Sunhee on top of him.

“I’m sorry!” Sunhee repeatedly apologized, getting off him as quick as she could, knowing he would hurt a lot as he cushioned her fall. “Are you okay?”

“I’m okay.” Hoseok wheezed, still not moving on the floor.

“Are you sure? That was quite a fall.”

Hoseok groaned as he pulled himself up to a sitting position. “I’ll live. Are you okay?” He looked at her worriedly. Her fall would have hurt more since she was higher up than he was.

“I’m fine. You took most of the brunt from that fall.”

“I could try lifting you again and get onto that stool at the same time. You could reach that cover for sure,” he said, pointing to the stool before looking around the room. “We could find something in here we could use as a screwdriver.”

“I vote nay for the stool. It’s dangerous. We can both topple down, and that could cause an even more serious injury,” Sunhee said. “Since it is difficult to maintain balance on the floor, it would be ten times harder standing on the stool. Besides, the cover is screwed shut too. What is it with this agency and screws? We might as well admit defeat.” She sat cross-legged and looked up forlornly.

“Someone is bound to be opening the door sooner or later,” Hoseok said, smiling slightly to reassure her.

“You’re right. Until that happens, I guess we’re stuck here. Do you have anything scheduled for the day?”

“Just personal practice and then home. How about you?” Hoseok moved to the nearest wall, trying to get comfortable.

“Practice with the instructor, which is going to cause me trouble later,” Sunhee said miserably. “I just hope it won’t be tomorrow until someone opens this door.”

“How long have you been a trainee here?”

“Huh?” Hoseok blurted out. The question was so out of the blue. “This is going to be my second year. How about you?”

“I know. I guess I’m the oldest around. I have the skills but not the cute look they want. I look too plain.”

“No, you’re not plain. You’re beautiful, and you’re one of the finalists for the next girl group that’s going to debut,” Hoseok said.

Sunhee laughed. “That’s the first time someone who’s not my family told me I’m beautiful. You don’t have to butter me up. I own a mirror.”

“No, seriously. You are beautiful,” Hoseok said convincingly. What was not pretty about the senior trainee in front of him? She was right about not being in the cutesy category. Her face was more mature, and if there was one word that could describe her looks, it was serene beauty—not that she was going to believe him, anyway. “I can’t say the same for me, though. I heard people going around saying I look like a horse.”

“Who said that?” Sunhee asked. That was a rude thing to say. Hoseok had a friendly face, high cheekbones and a prominent nose. His striking looks would make people swoon for years to come.

“Oh, come on. Don’t tell me you’ve never heard anyone say anything about the horse-faced trainee,” Hoseok said disbelievingly.

“I didn’t.” Honestly, Sunhee paid no attention to the names people gave trainees. Some managers were notorious for name-calling. It was the same for some trainees, and she didn’t want to be in any part of it. She knew her code name around there was ‘ordinary.’ It hurt, but she could care less. She knew she could out-dance any of them in a snap, and so could Hoseok.

It was a shallow industry in that regard, but she knew good looks would be a plus. It sold. She could work on the skills, but the thought of going under the knife just to fit into the K-pop standard of beauty made her shudder. Just because many people were doing it, that didn’t mean she would do it, too.

“I see you daily, dancing your day away, anytime, anywhere. You seriously got those killer moves. You’re smooth and neat. It’s only a matter of time until you get to debut.”

“I thought you didn’t know me. You didn’t even know my name.”

“Wrong. I know you. I’ve seen you around, but I never caught your name. That’s different. Besides, Seokhee and Hoseokie sound about the same, so I knew your name. Partially.” Sunhee smiled. “I just hope the agency knows they have a talented person like you here.”

“Why thank you,” Hoseok said. “Anyway, I’m planning to go for an audition for another agency. I don’t think this one has any other plans for me, and my contract is ending soon. I’d better make a move before it does.”

“Really? Which agency are you auditioning for?”

“Some small agency. None that you heard of, probably,” Hoseok replied, flicking at the non-existent dirt at the edge of his trainers.

“Why? This agency is famous, and I think you have a chance here.”

“That’s the problem. It’s famous, so there are a lot of trainees for them to choose from. They will overlook me.”

“You’re right. Lots of pretty and talented people to choose from,” Sunhee whispered. They had to struggle for the casting team to notice them. Just talent alone didn’t help that much. You needed the looks, the skills, the voice, and the personality to make the cut. It was not a walk in the park for some. Many have already failed. It was a competitive industry. “Just look at me, nineteen and still a trainee. Still haven’t debuted,” Sunhee said after a while.

“Yet,” Hoseok added. “You’re definitely going to debut this time. None of the finalists I know could b-boy and pop like you do. You killed it during the dance battles, and no one stands a chance against you.”

“Thanks for the compliment, Hoseok,” Sunhee said, a small smile on her lips. “Can I call you Hoseokkie? It sounds better and cuter, and it fits you.”

Hoseok went red immediately. He was not used to people openly praising him for his looks. “Of course.”

“How old are you anyway? I know you’re younger than me, but I don’t know by how much.”

Sunhee beamed. “Cool. I have a feeling we’re going to be way closer after this.”

Larale Nad is the pen name of a person usually found wrapped up reading books on the couch of her house whenever she is home after work. Writing has been her hobby since a young age, and sharing her stories has been on her bucket list. She had completed three stories on Wattpad, which she took the utmost care and time to write due to her small research and questions about the characters’ plights and issues she wanted to highlight. Her goal was to make the story logical and make sure readers learned something from it. Larale Nad lives in Malaysia, and English is not her first language. Sharing her stories on an international platform and mucking through the grammatical errors is a challenge that she gladly takes. This is an excerpt taken from “Jamais Vu” by Larale Nad with permission. Read the full story here.