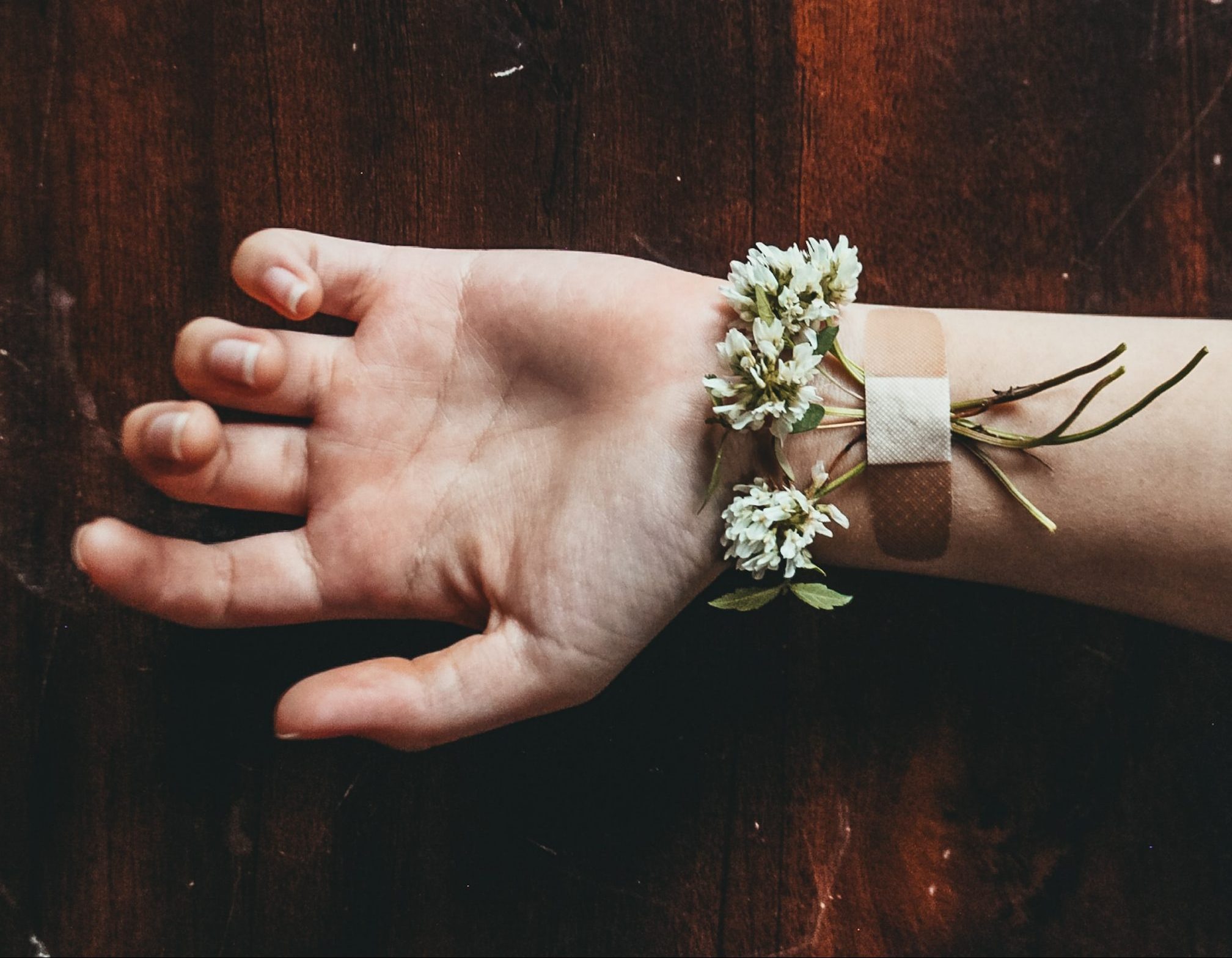 He couldn’t go to the agency because they were filming on-site with countless meetings, venue checks, practices in a much bigger studio than the one at the agency, clothes fittings, and photoshoots.

Nothing was out of the ordinary as Jae went on replying to Yoongi’s messages after the pepper spray incident, so imagine his surprise when he saw her arm. He had asked her about it when they bumped into each other in the hallway, and Jae kicked herself mentally. She should have worn a long-sleeved shirt to cover the bandage and avoid attention.

“Just a scratch, don’t worry,” Jae said. They just left it at that, seeing how Jae acted like it was a minor cut with a band-aid. People didn’t get a sleeve bandage from ‘just a scratch,’ and it was driving Yoongi crazy. He wanted to ask more, but he didn’t want to put Jae in the spotlight in public.

“What the hell happened?!” asked Yoongi when he later saw Jae entering the dance studio.

“What?” Jae said defensively. Yoongi stayed in there after practice, knowing that Jae would come in afterward. Since they met each other on the floor, he knew she was on duty there for the day. Jae picked up her dust mop and started to clean the room quickly.

“Don’t act like nothing happened. You know what I mean,” warned Yoongi.

“This?” she asked, raising her left arm, not stopping her work. “Just a small accident. I’m fine.”

“What kind of accident?” he asked. “And don’t you dare to raise the issue about the two questions limit.”

“Someone tried to rob the cash register. I just happened to be in the way,” replied Jae, maneuvering the mop. “Move, you’re blocking the way.”

“When did that happen?”

“You didn’t say anything in your text. Hell, you even texted as if nothing happened.”

“Why should I? I got stitched up, the knife didn’t hit any major arteries or whatever and I could still text. I went home, what’s the fuss?”

“If it wasn’t that bad, why the bandage?”

“To protect the whole five and a half inches of stitches until it’s time to get them out.”

Yoongi cursed colourfully, causing Jae to throw a wet rag at him.

“Stop cussing,” she said. “I don’t get why you are so worked up when I am the one with the cut.”

“How did you get home after that?” asked Yoongi.

“By bus. I don’t have a chauffeured limo at my beck and call.”

“You said your brother is in Seoul. Where was he when all that happened? Why didn’t he help you?”

Jae stiffened and turned to Yoongi. “That is none of your business. What I do and what my brother does is none of your business. Just get back to your job, and let me finish my work.” She was practically running to get the studio clean. Normally, she was not that fast, but since she had a very ticked-off person in the room, she had to be. She turned her back on him and started to steam clean the mirrored wall.

Jae felt like there was a lump in her throat. If he said that years ago, she would be over the moon, jumping up and down like a mad girl. Now, it just made her feel sad. She couldn’t look at him. When the mirror began steaming up, she shook her head and continued to wipe the moisture.

“Thank you,” she replied.

Yoongi sighed heavily. Throughout the weeks of their reacquaintance—if anyone could call it that—he could almost read her. She was the worst when she was in her defensive mode. Nothing could get through to her. He had to change his tune, tread lightly. “I don’t expect anything. I just want you to know that I like you.”

Jae didn’t respond. She continued cleaning the mirror as quickly as she could.

“When are you going to get the stitches out?” he asked.

“I have an appointment in two weeks. The doctor told me to keep the wound clean and change the dressing regularly,” said Jae.

“If you need any help, just tell me.”

“Then why is your bandage loose?”

True to his words, because of her vigorous wiping, the bandage clasp was hanging and the gauze was barely contained. Yoongi turned off the steamer and pulled her down to sit on the floor. Jae followed him, and he removed the bandage. She hissed when the thread from the gauze got caught in the stitches.

“Sorry,” he said. “Do you have spare gauze somewhere in your trolley? Antibiotic cream?” Yoongi looked for it in a bag in one of the compartments without waiting for her answer. “This one?” he asked as he put up a small case.

“That’s it,” Jae replied, and Yoongi sat down in front of her. “Don’t you have to go to a meeting or something? Your comeback and concert tour are next week.”

“I have enough time,” he said as he inspected the content of the case before taking Jae’s injured arm.

Her wound was still red, but it was healing nicely. The doctor who did the stitching did a really good job. It was neat and precise. Yoongi cleaned his hands with the sanitizer in Jae’s trolley and set the bandage nicely after putting on the cream with a cotton bud. Jae kept her head down the whole time.

When was the last time someone fussed over her? She couldn’t remember. Was it before she left New York as she waved goodbye to her foster family? She wondered how they were. They had lost contact not long after when she lost her phone. A myriad of thoughts went through her head. Who would have thought the guy that she chased relentlessly when she was a teenager would be attending to her wound, even though she was not a willing participant. Was she?

Dressing the wound on her own didn’t give her much trouble, but wearing the bandage was difficult. She wanted to leave the wound out without any cover, but it pained her when it rubbed on her clothes as she moved.

“All done,” announced Yoongi as he secured the bandage clasps.

“Good thing I’m not a Goryeo nobility’s daughter,” said Jae as she flexed her arm. The bandage was neat and tight, and she could move comfortably.

“Queens and concubines of Goryeo kings can’t have their skin marked or scarred,” said Jae.

Yoongi rolled his eyes. “Everyone knows that. You plan on marrying Goryeo royalty?”

“Nope. There’s none nowadays anyway. Just stating that fact. Never knew about that before,” said Jae. “I went to the U.S. for school, so I didn’t learn that much Korean history.” Because he looked puzzled, she added, “I missed out a lot on Korean history.”

“I could teach you a thing or two,” said Yoongi as he cleaned his hands. He was interrupted when his phone started to ring. “On my way,” he said to the caller. “Duty calls.” He turned to Jae as he stood. “If you need help with the bandage, call me,” he said as he waved her goodbye without waiting for a reply.

Jae’s eyes followed him to the door. She’d better not get used to the attention. Being who he is and the position he is in right now, being involved won’t bring anything good to both of them. Idols lived in the spotlight, supported by a group of devoted fans, so he could barely move without anyone noticing. A whiff of a scandal would bring an idol down, and journalists were always sniffing out news like vultures. She wouldn’t say that her life was squeaky clean, but it wasn’t filled with juicy scandals either. When her final debts were paid, she would leave Big Hit. It wouldn’t take that long, and it would be best for both of them.

Larale Nad is the pen name of a person usually found wrapped up reading books on the couch of her house whenever she is home after work. Writing has been her hobby since a young age, and sharing her stories has been on her bucket list. She had completed three stories on Wattpad, which she took the utmost care and time to write due to her small research and questions about the characters’ plights and issues she wanted to highlight. Her goal was to make the story logical and make sure readers learned something from it. Larale Nad lives in Malaysia, and English is not her first language. Sharing her stories on an international platform and mucking through the grammatical errors is a challenge that she gladly takes. This is an excerpt taken from “First Love” by Larale Nad with permission. Read the full story here.