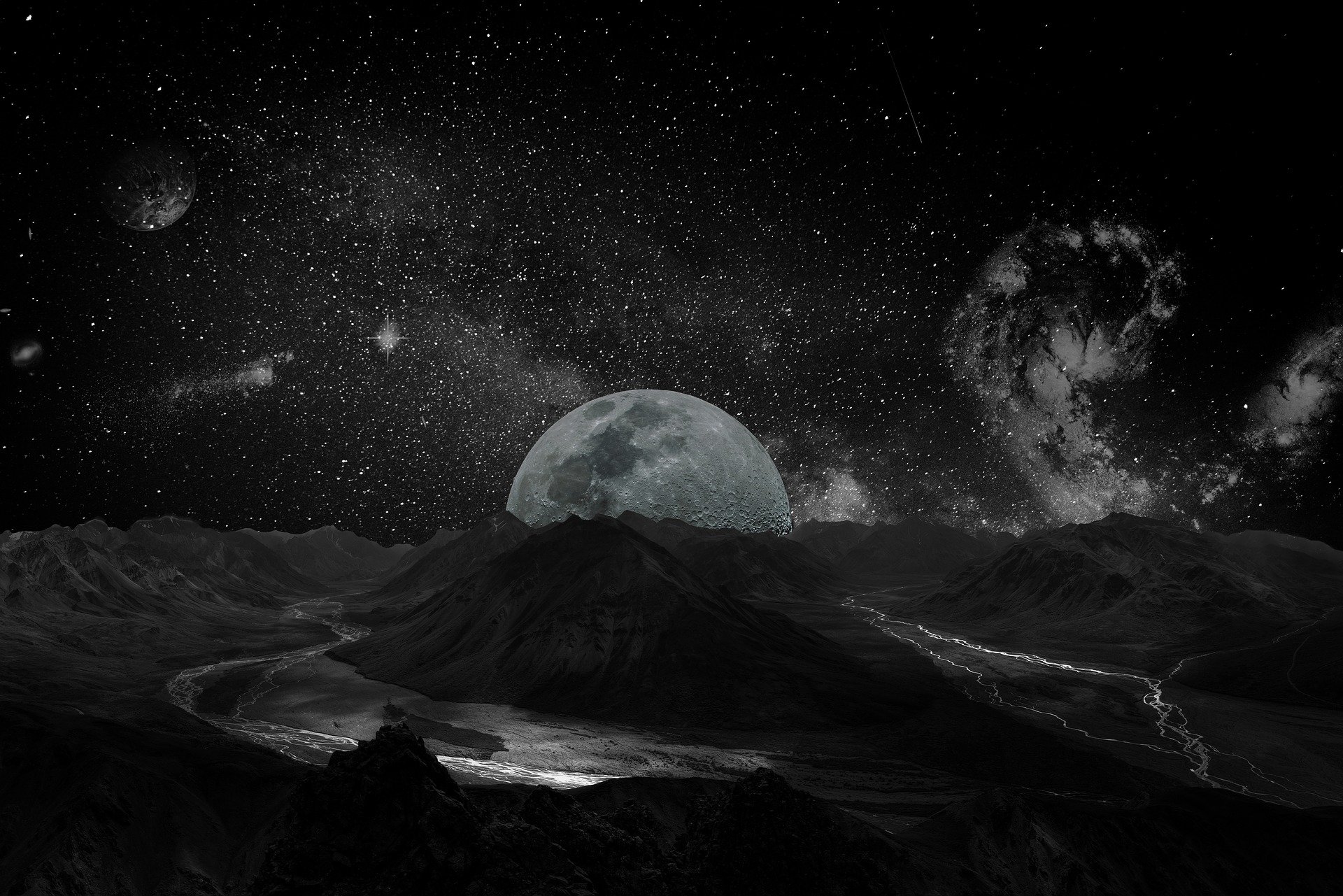 It’s enough, knowing you are calling to me,

while we’re dreaming beneath the same moon.

So bring me the night, tell me it’s near.

Give me a chance to pretend that you’re here.*

Jimin crushed the clumps of moss, squishing them and leaving a dark green footprint behind. He paused, standing on the leafy-carpeted floor as he gazed at the astounding sight.

The silent whispers of the wind swept through his ears as he eyed the lake that was glistening in rainbow tints because of the colorful flowers and algae mixed in the moonlight. The reflection of the moon in the tranquil water was another breath-taking sight, along with the background of lament asters.

Millions of diamonds of different shapes, sizes, and colors were stuck on the black canvas, all harmonized together in their lights, illuminating the surroundings with countless spotlights. The olive-green trees stood tall like a fortress surrounding the vicinity of the lake. Deep, dark caverns lurked inside the woody heaven, and fireflies roamed like glowing strands of lights, mixing their yellow shades into the starlight rays.

What was more beautiful: the stunning scenery or his mate? How could he even compare? The answer would be his mate.

His stomach churned the fizzing butterflies inside as he pulled his body in the direction of his mate, who was the most beautiful boy to ever exist in his eyes. Jimin took small, striding steps in his mate’s direction. A mass of brown hair was now visible. A few steps more and a side view of his strikingly handsome face with a razor-cut jawline was evident. He was finally close to him, within a three meters distance.

The brunet was busy cradling the flowers with his fingers, plucking the glowing petals, one knee on the ground and the other knee facing the sky. His skin radiated from the blaze of fireflies and flowers, adding multiple points to his already full marked beauty. His brunet strands swept down his forehead, hiding his beautiful peacock-like eyes and leaving a dark shadow below them.

Aware of Jimin’s presence, the brunet froze and turned to look up, a delightful boxy smile lighting his face. Without any exchange of words, they moved near a tree and made themselves comfortable underneath it, facing the spectacular lake and galaxy of stars.

Jimin leaned back on the bark of the tree, peeking glances at his other half, who was busy stargazing. There was no need to do anything as long as they were together. The only thing that mattered was them being under the same skyline. At least that was what Jimin thought.

There were invisible strings attached to their souls that connected both of their hearts. No words could depict the feelings he felt at the moment. After a few seconds of stillness, the brunet extended his right hand and raised his index finger, pinpointing a particular position in the night sky.

“Can you see those three stars? Those are Altair, Vega, and Deneb. They are among the brightest stars in the night sky.”

He moved his fingers in a triangular direction as he differentiated those three stars and paused, looking at Jimin to see if he was listening. Instead of looking at the stars, Jimin was gazing at his mate’s lips, his eyes tracing the brunet’s facial features. He observed how they moved along with his deep, verbalized voice. Now that the brunet’s eyes met his, he turned away and pretended that he was looking at the stars all this while. Satisfied by the fact that Jimin was paying attention, he resumed his tale.

“In this legend, the two stars—Altair and Vega—are symbolized as two different individuals who hopelessly fall in love with each other. However, Altair and Vega belong to two different worlds. Their parents forbade the relationship and tried to separate them. There are various stories about the reason their love was forbidden.

“The legend says that they can only meet by crossing a bridge that is formed by magpies, who had come to their aid. Once a year, on the seventh day of the seventh month, Vega cries so hard that all the magpies in the world fly and create a bridge with their wings so that the lovers can be together for a single night of passion. The constellation Cygnus serves as the magpie bridge over which they can meet.”

Jimin who was attentively listening to the story was awed at the astonishing legend, so the brunet continued to tell him more about the constellations.

“These are also called the stars of the summer triangle and they are 16.7 light-years apart from Earth.” The brunet felt a blob of mass on his right shoulder, so he turned his head and saw Jimin sleeping like a baby in the crook of his neck.

The brunet slowly pulled Jimin closer and let his head fall on his lap. He swept the locks from Jimin’s forehead away and bent down to faintly kiss it. When Jimin’s fluttering eyelids closed, he then spoke in a low, deep voice. “Your V will be waiting for you on the other side of the bridge.”

*Lyrics from Sam Tsui’s “Bring Me the Night”

Alora is a writer on Wattpad. You may find more works at dreamybantanie. This is an excerpt taken from “Astro’s Luna” by Alora with permission. Read the full story here.